Can You Lose Fat Just By Chewing Your Food? 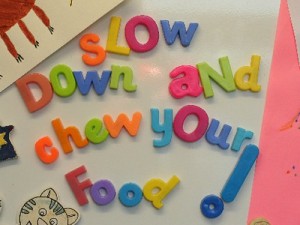 “Chew your food, please! Chew lots!” I find myself saying this to my kids a lot.

It also applies to the rest of us.

We all know that we’re supposed to chew our food. One hundred times per bite! That was the challenge issued when I was a kid. It was pretty hard to do because by the time you reach 100 chews the food has completely turned to liquid and just makes its way down to your stomach.

I guess that’s the point. I’ve also heard that you should chew until the food is like soup. “Drink your meals and chew your drinks” is one of my favourite digestive rules of thumb.

It’s actually very simple. Your body uses a lot of the energy that you get from your food just digesting it. If you can reduce the energy used for digestion, then you free up a lot of energy for things like metabolism, immunity, alertness, tissue building and repair, and more.

Sending poorly chewed food down into the stomach means a lot of blood has to leave places like the brain to go to the stomach to work on churning up what you just ate. This is required so that the food can get to a point where the intestines can take over and break it down to the macronutrients that the cells need to function without illness. This is one of the reasons we feel tired after eating a meal that is difficult to digest.

Sending food chunks into the stomach and then drinking coffee or eating another meal when the stomach is still struggling with what you didn’t chew earlier forces large food particles into the small intestine where they don’t belong. This damages the intestines and is a cause of food allergies. Catch that? Chewing your food prevents and can alleviate food allergies.

Ever Notice That Some Foods Are Easier to Chew Completely Than Others?

I find that, no matter how hard I try, I simply cannot chew pizza as much as I should. I just want to swallow it down and enjoy. Maybe it’s the taste. I believe it is the sauce.

What is pizza? Basically a bunch of bread (starch) with sauce – to make it slide down your throat – and some other toppings that slide down with it.

Pasta? Also very very hard to chew adequately. Because of the sauce it just wants to be swallowed quick. Hmm. Starch with sauce. Is this a pattern? I think it is.

Noodles without sauce get very sticky and are going to be hard to eat, so we cover them in sauce. Same with bread. There’s almost always some kind of sauce on sandwiches, right? Sauce is there to make the food easier to swallow.

This is a problem.

Starch Really Needs To Be Chewed

If you chew a mouth full of pasta once and swallow it down, the stomach isn’t going to do the work for you like it might be able to with protein and fat. The food will just sit there and eventually begin to ferment (giving you gas and possibly acid refllux) until your next meal forces it into the intestine. You’ll feel very tired the whole time it sits in your stomach and the starch will stored as fat.

You can do yourself an enormous favour by making a point of chewing your food completely, especially starches.

I’ve decided to try not to eat things with sauces much. This forces me to chew. I’m not going to swallow something dry without chewing it adequately first. It just won’t happen.

So Can I Lose Fat By Chewing My Food Or Not?

Yes. The more you chew your food, the more the nutrients within it will make their way into the cells that make up your tissues rather than being stored in fat cells because the body can’t do anything else with them. This means you’ll have improved metabolism, so you’ll create less fat and also burn more of what you’ve already accumulated.

You can also improve your alertness and feel more sharp.

JUST BY CHEWING YOUR FOOD.

So listen your parents. They were right.

I help people transform their health and their finances. Anything else? EVERYTHING comes next.